people
As light comes through the stained glass windows now covered with red photosensitive screens, the church interior is sunk into an ocean of red light. As in photographic darkrooms where images are produced, the red light invokes images on the blank surfaces of the church, images of memories. In the summer of 2018, Giorgio Andreotta Calò devised a site-specific work for the Oude Kerk entitled Anastasis, which effected a drastic alteration to the church’s interior. The work inevitably evoked cultural memories of destruction – the most obvious perhaps being that of the Iconoclastic Fury in 1566, when Amsterdam’s Protestants broke into the then Catholic church and destroyed all the religious images, which were deemed idolatrous. Calò reintroduced the color red, which has been absent from the church interior since the destruction. Moreover, he also invoked all the destroyed images, which – just like images on photographic paper – are present in their absence in the red light. However, the possible meanings of the work were virtually extended to all instances of iconoclasm – in the past and the present – that have left people and communities with the traces of destruction in the built environment and in their own memories. And just as the destroyed images emerged in Calò’s work, so did new questions arise in the contemporary beholder. Who has the power to represent God or our reality? Is iconoclasm an act of destruction or a revolution by those who feel discontent with the current regime of images? Now that we have so many other vivid memories of iconoclasm – like the destruction of Soviet monuments after 1989, the demolition of images of imperialism in former colonies that declared their independence, or statues that Black Lives Matter demonstrators have pulled down as symbols of slavery, segregation, and racism – how do we remember and interpret the 1566 Iconoclastic Fury?
(◦) Marianna van der Zwaag
(◦) Anna Magyary 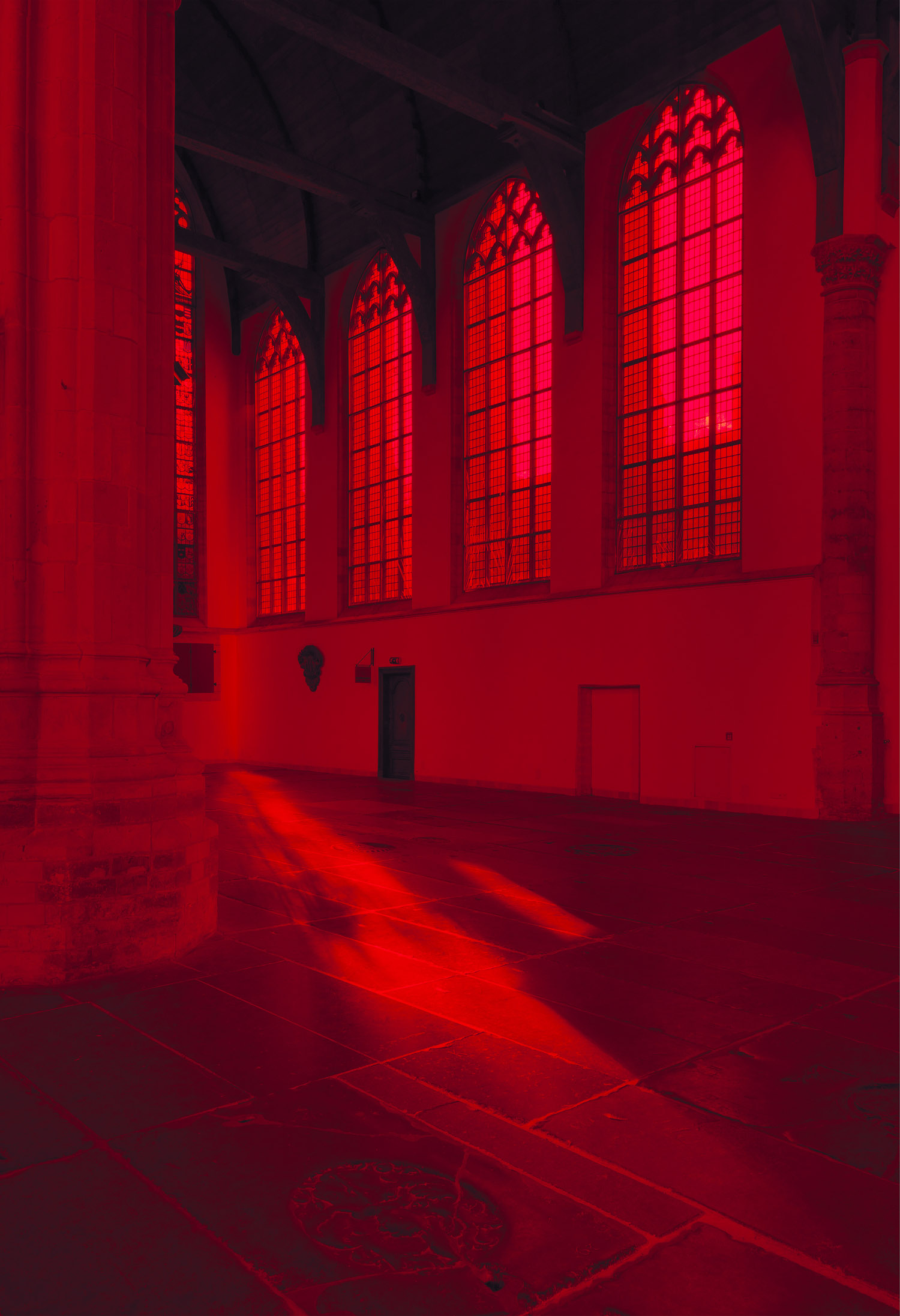 Giorgio Andreotta Calò, Anastasis αναστασis (2018). Curator: Jacqueline Grandjean; photo: Gert Jan van Rooij.
Places like the Oude Kerk are unique lieux de memoire; they embody memories of the past – be they forgotten, incomplete, or active memories – that can speak to us and relate to topical issues in today’s society. And as Calò’s work showed us, art can be a powerful means to bring these memories to the fore and let them talk to us. The artistic interventions that the Oude Kerk has presented since 2012 all aim to uncover past meanings, take them as points of departure, and create surprising and unforeseeable interactions with contemporary meanings – a relation that we call interhistorical.

In fact, the Oude Kerk as an archive is more than a simple metaphor. In 1578, the already Protestant church became the first city archive in Amsterdam, where the most important documents of the city were kept and citizens had to register their marriages. If, back then, the Oude Kerk was already both a place of memory, bearing testimony to the events that affected the city’s society, and a place that played an active part in social and individual life, can it again become an archive that connects past and present?

Unlike sixteenth-century archives, the archives of today are flexible systems that grant a broad audience access to the material they preserve. Moreover, they empower the crowd to organize, share, and search content themselves. Sometimes, these new archival practices driven by communities are referred to as the “living archive,” implying openness, collaboration, and creativity. With the increased accessibility of archival material, the records can be constantly recontextualized even though the source material remains intact.1 In this sense, one could argue that this is at the core of the artistic programming of the Oude Kerk: to constantly give new meanings and contexts to the existing heritage of the church.

This was an important realization for us when we were facing both the need and the difficulties of archiving artworks that somehow seemed more than objects with physical parameters. We wished to preserve more than that. The artworks in the church are much more about the process through which an artist interrogates the site, the artistic research, the conversations with local communities, and all the discussions around the works once they are installed. Or in other words, the artwork is the process in which new contexts and meanings are constructed by using the existing material.

To get back to the example of Calò’s installation, everything, from the moment he entered the church and was inspired by its atmosphere to the controversial debates around his artwork, was part of the process and many different actors and communities participated in it. The memories (or maybe traumas) that Anastasis brought to the surface, the experiences that people had while they were engaging with the artwork, but also the new memories that the installation left behind. The Oude Kerk’s atmosphere can’t be the same after an artwork has been exhibited there either – even after it has been uninstalled and lives only in the memory of the audience. 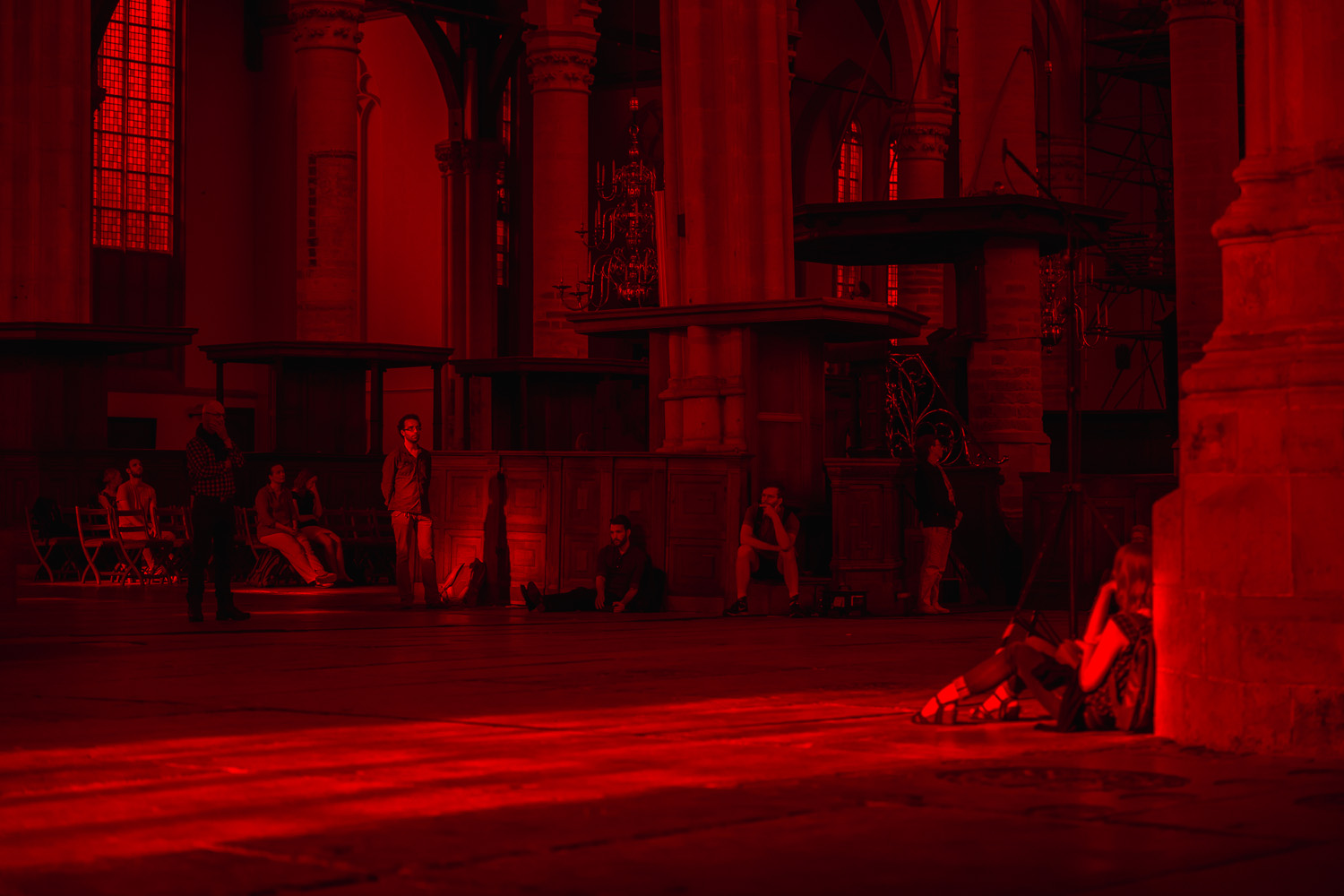 Silence #12 during Anastasis, with Zeno van den Broek. Curator: Jacob Lekkerkerker; photo: Maarten Nauw.
This is why the new archive that we want to build in the Oude Kerk necessarily has to be open-ended and collectively shaped. If we aim to archive the processes through which new relations between past and present, artwork and site, and communities and works unfold, there can never be an end to the proliferation of new meanings. Neither in time – since new layers will be added to them – nor in terms of its accessibility – since everyone can contribute to the building of a democratic archive by participation and the addition of their own memories.

Building such a participatory and open archive is a long and complex project. We have to face inevitable but difficult decisions such as what should be included and what should be left out; how we can grant accessibility and enable participation for a large audience; how we can create new connections between the archived material, initiate new discussions, and encourage people to contribute. At the moment, we are still in discussion with a wide range of stakeholders, from members of local communities and art lovers to experts and artists, in order to find out the next steps in realizing this vision. We also plan to set up a diverse program that brings people on-site and invites them to react to these questions and share memories and experiences with us that they consider important for the archive.

A new and open archive can radically show that heritage is not about the past but about its relation to our present and that it demands continuous discussion and reinterpretation to stay alive.
1. Annet Dekker, Lost and Living (in) Archives: Collectively Shaping New Memories (Amsterdam, NL: Valiz, 2017), 17.


This email address is being protected from spambots. You need JavaScript enabled to view it.