people
The Motel Trogir project was launched in 2013 by Loose Associations – the platform for contemporary art practices, and its associates – as a civil campaign focused on the motel built in Trogir in 1965, designed by Ivan Vitić, one of the most prominent Croatian architects of the twentieth century. Vitić’s motel is a rare example of outstanding modern architecture in Trogir, a mid-Dalmatian coastal town with approximately thirteen thousand permanent inhabitants, of which about a thousand live in its historical center, which has been inscribed on the UNESCO World Heritage List since 1997. The project consists of many activities and has developed a specific methodology which can be described as a combination of civic activism and scientific, publishing, and educational work, including curating and producing contemporary art projects. One of the project’s main goals was to ensure the motel’s formal recognition and protection by the proper authorities, which was successfully obtained: the motel in Trogir was included in the List of Protected Cultural Goods of the Republic of Croatia in 2013, while in 2015 another motel in Rijeka, a variant of the same original design by Vitić, was added to the list. By insisting on the qualities of this architectural concept and its significance for the history of tourism in Trogir and for the town’s community life, the project seeks to oppose the dominant media narrative which views the motel area strictly in the light of its present, dilapidated state, thereby implicitly advocating radical solutions conforming to the appetites of potential investors. In this respect, the Motel Trogir project also broached the subject of the social valuation of the still often stigmatized socialist era’s tangible heritage – not only for the purpose of canonizing specific structures or architectural complexes, but also to preserve the cultural memory and social affirmation of (Yugoslav) modernism and its influence and current significance.
(◦) Nataša Bodrožić 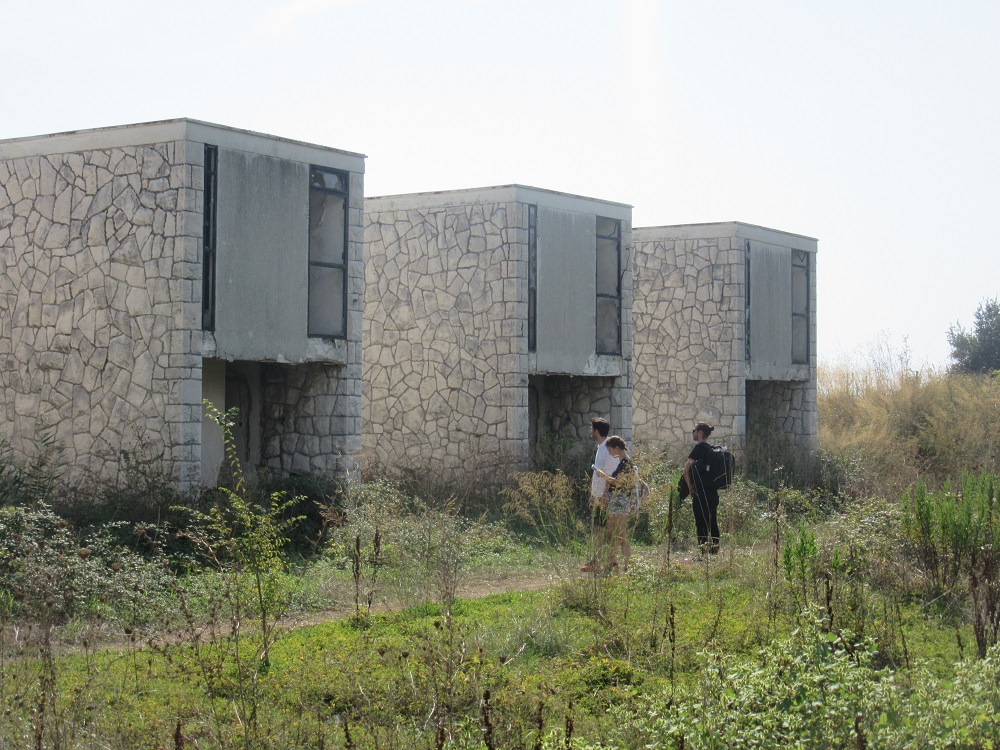 Asked once how we see art production within the MOTEL TROGIR project, we answered that, every time, we try to articulate some sort of community. Art production is part of the MOTEL TROGIR campaign, but not necessarily its illustration. Here we arrive to a complex territory and relations, with regard to which it is very important to clarify what we actually produce, how, but also, what our starting points and (political) views are. So the initial input is pretty clear, but further than that, we could say we have no control. The moment an artist starts working on a certain idea, the curator and the Motel Trogir project team serve only as support to them, both conceptually and organizationally. Of course, we also try to influence the outcome of artistic research, in terms of encouraging dialogue or suggestions, but at the end of the day, the artists shape their work themselves, take responsibility for it, and we treat them as part of the Motel Trogir community.

In 2014, within the project's framework, we organized the first art interventions in the public space of Trogir and presented three different artistic positions. On that occasion, Split-based artist Neli Ružić conceived the video work Stolen Future, derived from the IN SITU light intervention in Ivan Vitić's motel. Soon after, in 2015, the work got awarded and became part of the permanent collection of the Museum of Contemporary Art in Zagreb. 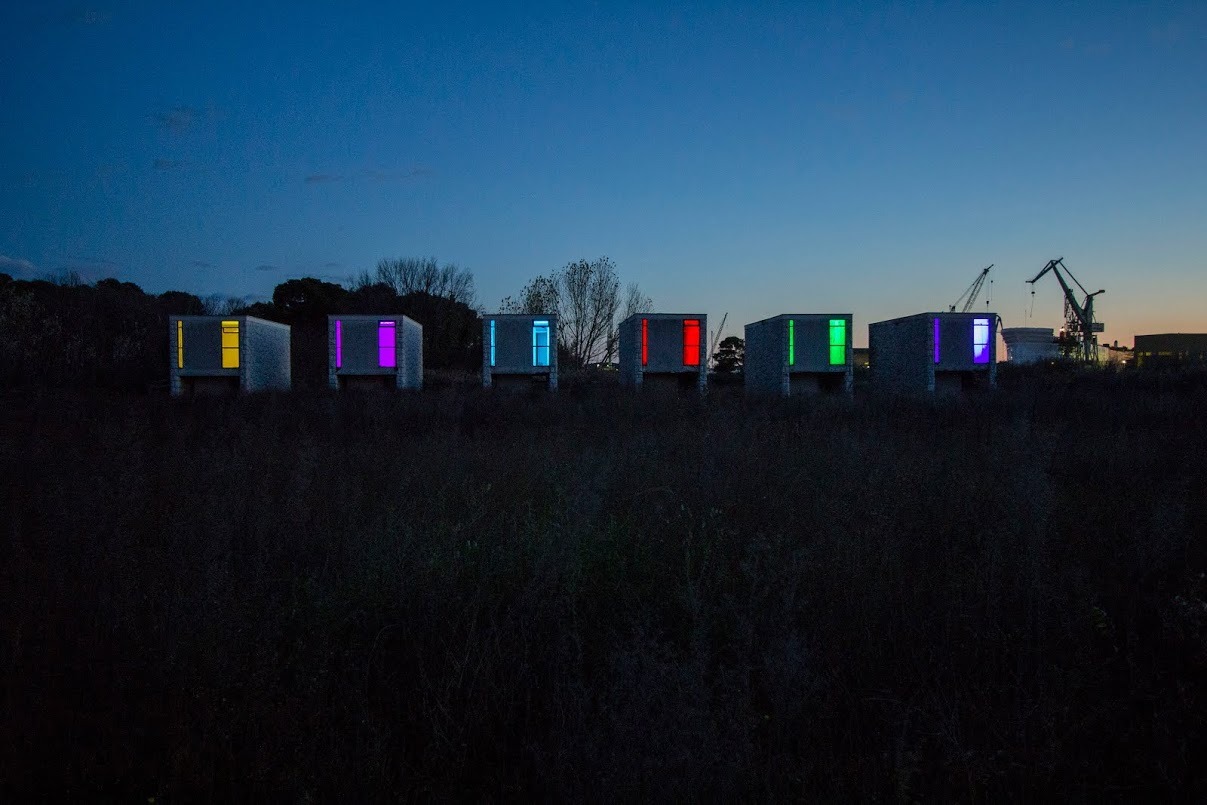 In 2015, in collaboration with Mediterranea 17 – Young Artists Biennial, we launched our first short-term artist-in-residence program, by hosting seven international artists selected through an open call. The collaboration continued in 2016, with an artist-in residence program, study visit and art production. The exhibition East is West of the West, derived from the residency program and long-term engagement with five international artists, was presented in Tirana, in spring 2017. Following the interest in the project of artists from former Yugoslavia and the international public, Loose Associations established a long-term artist-in-residence format as well. In 2016/2017, in the framework of the project DISSONANT (CO)SPACES, we invited the artist duo Doplgenger from Belgrade and conceived their stay in two parts: first they came for a study visit and then returned after they chose the location for filming. The result of our collaboration is a short film presented on this symposium/platform entitled A Record of Landscape without Prehistory, co-produced by Loose Associations and premiered as a test screening at the symposium "Towards a New Heritage" in Split, in October 2019.
(◦) Snimak pejzaža bez predistorije 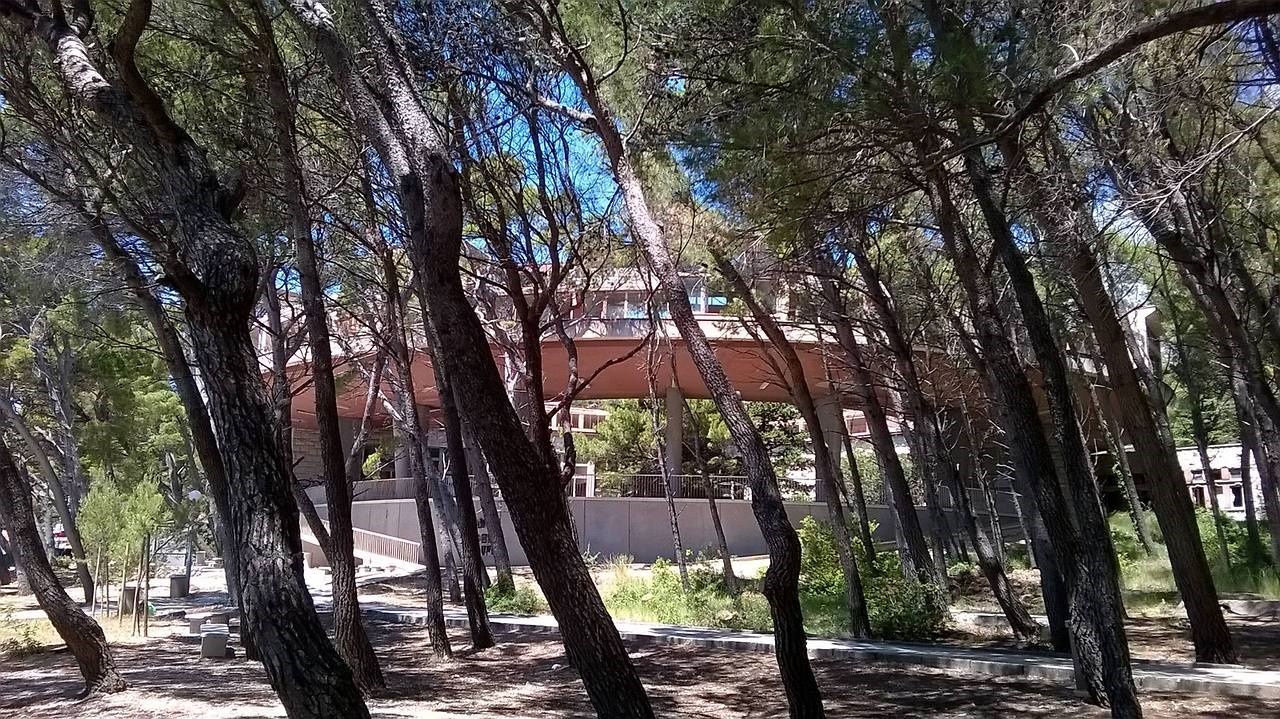 The starting point for the film is a circular building of the former Children’s Maritime Health Resort, one of the dilapidated architectural masterpieces built in the 1960s, designed by architect Rikard Marasović. The building is situated in Krvavica, a small, picturesque village three kilometres west of Makarska, in a small forest next to a pebble beach. Built in times when Croatia was part of the socialist Yugoslavia, it was part of the military infrastructure, but its main purpose was the treatment and recovery of children suffering from respiratory diseases. According to researchers, for some time, the health resort was strictly controlled by the military and inaccessible to the villagers and tourists of Krvavica. It was also hidden and out of the focus of architectural interest. However, more and more stories from the early 1980s have emerged, describing the health resort as a vivid place open to the local community. During the war in Yugoslavia, the building was used for sheltering refugees from war-stricken areas. In the second half of the 1990s, the building was "demilitarized", but had a similar destiny like numerous other former military facilities; it was left to the local communities, privatization funds and public institutions, which led to its gradual devastation. All this needs to be observed in the light of the so-called "transition" and rejection of the heritage of Yugoslav socialism. 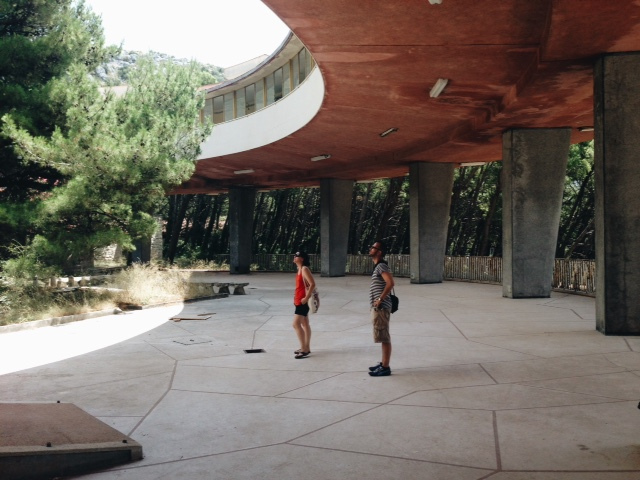 Building a circular narrative in an epistolary form, uttered in a female voice, the Doplgenger film opens up a fragment from the life of a woman who spends time at the sea. Through an intimate letter from a vacation, the story unfolds in an indefinite time frame. Carefree days on the beach are intertwined with ominousness and a hidden tension. Time breaks down as the story unfolds, its determinants change with the instability of the words which describe it. The film dissolves the (linearity of) time, but also of meaning, destroying the structure of spoken language, as well as the very materiality of the film (film tape).
The topic of mid-20th century modernist architectural heritage from the time of socialist Yugoslavia and its unsettledness/neglect was a trigger for starting the residency as an integral part of the Motel Trogir project. However, the art production went significantly beyond the concrete space and buildings. During the CDCM project, three new works were commissioned/produced, each of them taking its own course in broaching the subject. The works of Tilmann Meyer-Faje from Amsterdam, Vlado Danailov / Mila Dimitrovska from Skopje and Marko Tadić from Zagreb will be presented in an exhibition entitled Distrust the Storyteller. More details will soon be available on this link: https://slobodneveze.wordpress.com/2020/04/14/distrust-the-storyteller/